(6.12.2018) Policy makers in and outside Europe have since 2017 discovered a gender divide in the trade policy and are starting to introduce specific policies to promote women’s economic empowerment. However these new policies and reflections fall short of a trade policy that effectively promotes and protects the rights of women.

This briefing paper published by WIDE+ gives an overview of the ways in which EU trade policy hinders the protection and promotion of women’s human rights, and makes several recommendations to EU policymakers to change this. The paper is available in English, French, Spanish and German.

The paper highlights how essential it would be to include the participation of women and women rights activists into multilateral policy spaces and negotiations.  The paper is released on the same day on which many women’s rights associations and other civil society are expressing disappointment and dismay once again, at the failure of the WTO, and in this case also the Government of the Netherlands and the World Bank Group to meaningfully include broader civil society or women’s rights groups at a public space.

On 6 and 7 December a gender and trade conference is being organized by these institutions in Geneva that will mark one year of the Buenos Aires Declaration on Trade and Women’s Economic Empowerment, issued at the 2017 WTO Ministerial Meeting. Extremely limited space has been made available for CSO representatives to speak as part of the many panels organised.

Since the issuance of the Buenos Aires Declaration, there has been a series of WTO-organised events that have systematically ignored the meaningful participation of women’s rights organisations and civil society.

In a letter published by the Gender and Trade Coalition, comprised of nearly 200 feminist organisations around the world, the coalition remarks: “it is key to remember that current trade policy impacts not just the women entrepreneurs on whom there seems to be overwhelming emphasis, but women as farmers, workers, patients, caregivers, environmental defenders, and so on. We do not see any attempt to understand the varied and complex impacts they face, most often unknowingly, from the current trade regime or to include them in these discussions”.

From a feminist perspective, the overall goal of an economy, which includes trade and investment policy, should be to sustain its living foundations in terms of human, social and natural resources. This means economies should ensure a sustainable livelihood for everybody, recognise all forms of labour, including care and social reproduction, and aim at a good life for everybody which goes beyond material and monetary wealth as measured in GDP.

Current EU trade policy takes us further away from this vision of caring economies, either in the EU or elsewhere. EU trade policy follows neoliberal doctrine that promotes reducing transnational tariffs, combined with global deregulation of investment and services and in some instances protectionist policies for European producers – e.g. agriculture and through promoting intellectual property rights. 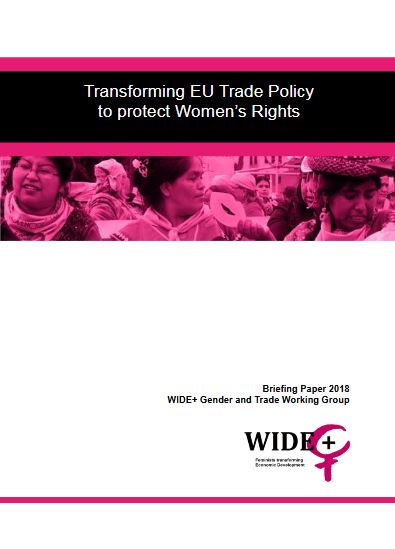